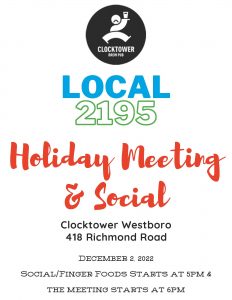 Please note that due to scheduling difficulties, we have had to make some changes to our announced plans around the December Social and GMM. Exceptionally, our December GMM will be on Friday, December 2nd along with our Social. Please see below for details:

Date: Friday, December 2nd, 2022
Time: 5pm arrival, meeting to begin at 6pm
Location: Clocktower Brew Pub – 418 Richmond Rd
What: Food will be provided by the local. Members are responsible for their own drinks.
GMM will take place from 6-7pm.

Please note that there will be no option to Zoom in for this meeting.

We hope to see everyone out for the first social in 3 years!!!!

CUPE and Canada’s labour movement are celebrating the defeat of Doug Ford’s draconian anti-worker legislation Bill 28. The bill would have imposed a regressive contract and stripped 55,000 CUPE education workers in Ontario of fundamental Charter rights.

This morning, however, Ford committed to repeal the bill and head back to the bargaining table, after being faced with the prospect of escalating province-wide labour action in the coming days – representing a massive victory for organized labour and workers’ rights.

In Toronto, flanked by dozens of labour leaders representing millions of Canadian workers, CUPE’s National President Mark Hancock credited the victory to the power of worker solidarity across public and private sectors, but especially the courage and determination of education workers.

“CUPE’s frontline education workers, 70 % of whom are women, stood firm. They took on the Ford government. And the government blinked,” said Hancock. “We’ve shown that when our rights are under attack, our movement is strong – and we will stand up for each other.”

“The work of our members is what repealed this bill. This is unprecedented,” said Laura Walton, president of the Ontario School Board Council of Unions (OSBCU), which represents 55,000 CUPE education workers in Ontario. “The organization of the members moved the government to this place, and the mobilization of our members will ensure that a real deal is achieved at the table.”

This isn’t the end, it’s just the beginning. The work is not over, but it’s clear that Canada’s labour movement will back CUPE’s education workers in Ontario until they achieve a fair collective agreement with the wage increases they deserve.